I was back on the water today for a for a few hours with Caro and my dog Crash. It was his 2nd time on the boat so I thought I was going to have to watch him all the time but he was surprisingly very calm!

We fished the same body of water as usual but started from a different area. We finally had less wind today with a 10 km/h W so it made the boat positioning a little easier. Water temperature is still around 73 but the water has cleared up a little since last time. We both started off with tube jigs hoping to connect with a giant smallmouth again. We got very little action with them so I thought it was time for a change because I knew the fish were there... they just didn't want to bite! I thought I would try a wacky rigged senko this time but with weight so I added a split shot sinker and Caro tried the new Gulp Alive from Berkley. It ended up being the right choice as I hooked up a NICE smallie on my first cast that went airborne and got unhooked... Sad thing because it was a solid 4lbs+ and we only had about 30 minutes left to fish. We managed to catch a few more but nothing worth taking a picture....
Posted by Jon Belanger at 8:10 AM

Fishing weekend with the girlfriend (Part 2)

We were on the water a bit earlier today hoping to catch some giant smallmouth again. Caro promised she would get the lunker today after seeing my battle with the 4lbs yesterday and guess what... she was RIGHT! We decided to start in the same area as yesterday hoping the fish didn't go very far. We had just about the same weather with more wind but less rain... again from the SW. Seeing as we had a good chop on the water I decided to see if they would hit a spinnerbait so I showed Caro how to work it but apparently the fish weren't as active as I had predicted so she was back with the tube. It ended up being the right choice because in no time she was going head to head with what was going to be the biggest smallmouth of her life! An honest 5lbs+ bronzeback! The fish gave her one hell of a battle..... at one point I thought we were going to lose it when I saw it swim right under the boat... SHE WASN'T READY YET! After a few jumps we managed to get the fish in the boat and that's when I realized that we had caught the first 5lbs smallmouth of the year! We continued to fish the same area and lost a few decent fish and caught a few other small ones but nothing spectacular... it didn't matter... we had a 5lbs! 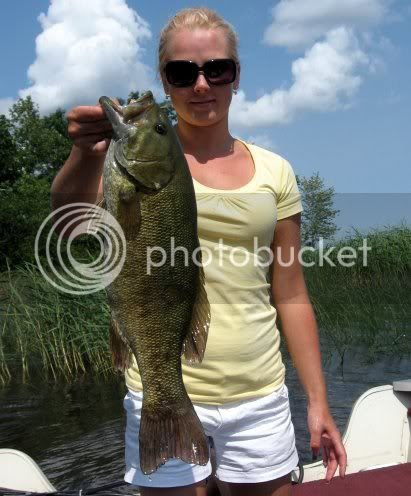 Fishing weekend with the girlfriend (part 1)

Caro decided she was fishing with me this weekend and I didn't complain!! Who can say they have a girlfriend who loves to fish... Not only is she in charge of the food and drinks.. THE LADY CAN CATCH BIG BASS! She's a serious contender to be my partner if I ever want to fish one of the bass trails eventually.

We started the day pretty late on a local lake for smallmouth hoping to fish the afternoon and the evening. I'm still a bit lost on this body of water but apparently I can still find fish. Water temperature was 73 in most places and believe it or not bass you can still find bass in the shallow. The water is stained from all the rain and wind we got recently but we were still able to hook up a few fish on tube jigs. I boated the first 4lbs+ of the year..... It gave me a hell of a fight and Caro netted the fish like a pro! We had SW winds of 20 km/h with even higher gusts reaching at least 40.... add rain to the mix and I decided to call it a day after only 3-4 hours. If I hadn't forgotten my rain coat we would've probably stayed a bit longer... If it wasn't for me Caro would've stayed till sunset! Overall not a lot of fish were caught and a few were lost but keep in mind those are all new spots i'm trying. Back on the water tomorrow! 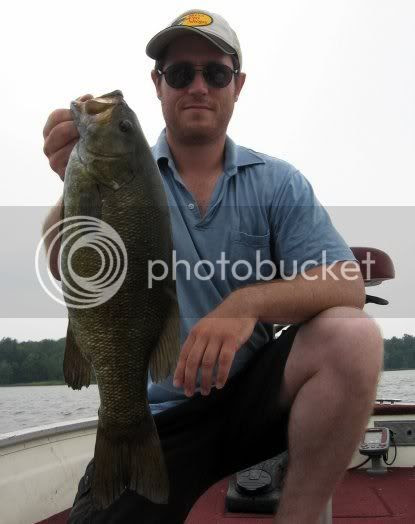 Why am I doing this?

First blog entry!! I never thought I would be doing one of those blogs but here I am.... I figured it would help me establish a pattern to find fish more effectively for the years to come and it's also a nice way to put down in writting my memories... so here it goes!
Posted by Jon Belanger at 10:13 AM