Sept 12, 2009
I was fishing St-Francis again with Caro and Marc-André and we were out to get the big ones today! We almost had no wind but whatever wind we had was from the NE so we still had a bit of a chop on the water. Water temps were still in the high 60's in most areas we fished. We started off on a shallow rocky shoal where I had caught decent fish in the past but no one was home so we quickly opted for another area. I didn't take long before I hooked a decent 4lbs smallmouth but this spot was only a one fish spot. We were to leave for deeper water tube dragging and drop shot fishing when I decided to try the same pattern in different areas and it was the right decision. Shortly after my 4lbs, Caro hooked a 4.5lbs smallie in less then 3 ft of water in the same conditions as the first one. I made sure to mark that spot on my GPS since those spots are hard to find and whenever you do find them, you usually end up spooking the fish.
We looked for similiar areas and managed to hook another 3lbs smallmouth but the hook ups were hard to come by so we decided to try an another area nearby. We drifted a bit and caught some 2.5lbs+ smallies in 10-30ft of water but we wanted more big fish to go with our 2 nice smallies! We really wanted to break the 20lbs mark and we knew the day was perfect for it to happen.
While drifting Caro noticed a nice lilypad patch and she wanted to try it so I handed her my frog rod and she started firing! It didn't take 2 seconds before she had a nice largemouth attack the frog. Needless to say we all got our flipping rods and frog rods out and tried going for largemouth for a few hours. At one point I noticed a big wave behind my frog and I knew something big was following it... BAM! A 5lbs largemouth just came out and annihilated the frog!! Thank god for this new stiff rod and 50lbs braided line because this fish could've easily gotten away. We fished for largemouth a little more and missed a few on the frog but we decided to relocate in order to find some deep water smallies. With another fish in the 4lbs range we would've probably been able to break the 20lbs barrier! When we got to the spot, we started catching 2-2.5lbs smallies and although they were a lot of fun to catch they weren't the size we were hoping for... With SO MANY wasps in this area it was getting simply ridiculous and we decided to call it a day. We took pictures and weighed all our fish for a total of 18.5lbs. Not a bad day at all afterall! 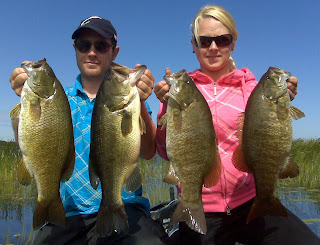 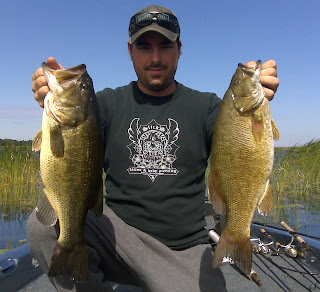 Sept 7th, 2009
Caro and I were fishing Lake St-Louis today. Marc-André and his girlfriend were going to fish with us but on his boat. I had a few smallmouth spots I wanted to show him and he had a few largemouth spots of his own that we wanted to check out in the afternoon. Weather was nice and we had almost no wind.
We caught a few small fish around 2lbs on my first spot on tubes, spidergrubs and gobies and Marc-André missed a 3lbs. We tried another of my spot where I had caught a few nice largemouths in the past and Marc-André missed 2 nice fish flipping a worm and I spooked a largemouth that looked decent.
We left for his spots in the beginning of the afternoon and Caro missed a nice fish on the frog and so did I. We tried following up with the worm but couldn't get her to bite. Before going home I decided one of my spots and caught a good 4lbs largemouth flipping a worm in the pads...
We decided to try to catch a walleye for dinner but after 40 mins and no fish we decided to head home and have some nice t-bones on the bbq instead! 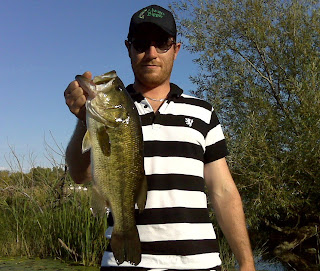 The study on Francis continues...

Sept 6th, 2009
I was fishing with my brother and Caro today on Lake St-Francis exploring the same area i've been fishing recently but trying new spots. Drop shot, tubes and gobies were on the menu for the smallies today and the plan was to fish from 20 to 45ft for most of the day. We had a light NE wind that slowed down our drifts just a bit too much but I made a few ajustements and we started catching them.
We must of caught around 35 smallies today. We were catching a lot of fish but we couldn't get anything over 3lbs really... We tried shallower water but the sun was intense and although we could see a lot of nice fish on the sand it seemed like they had already seen us and wanted nothing to do with our lures.
We had an "ok" day today and would've probably had around 15lbs which is not nearly enough for this lake! If I continu to fish this lake this often I can't imagine the amount of spots i'll have in 5 years! 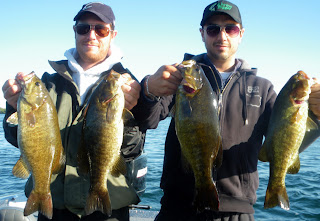 A nice little tournament on the Ottawa

Sept 5th, 2009
I was fishing a 2 fish tournament from http://www.fishin-canada.net/ today with Caro on the Ottawa river. I am really not a big fan of this place and I don't fish it nearly enough... We caught our biggest bass of the year (5.11lbs) on the Ottawa but I find it's a hard place to fish. I always struggle to make a limit but I'm usually able to find at least one big fish.
Water conditions were bad as usual... very murky on the river with some clear water in protected bays. I started immediatly where we caught our huge largemouth earlier this summer but couldn't even get a bite... I was flipping a jig and throwing a frog and Caro was throwing a worm and her favorite yamamoto bait. We eventually found a nice place where there was a little more current caused by the light wind and Caro started catching smallies. She caught 3 in about 10 mins but they were all just over 2lbs.
We decided to try a completely new area in a very shallow bay. It looked like a frog fishing paradise. I finally hooked a decent fish over 2.5lbs on a frog and Caro managed to catch a largemouth just a bit bigger then her smallmouth so we had to switch them. About 45 mins before the end of the tournament, I missed a 4lbs largemouth TWICE! She was in stick weeds in less then 2ft of water and attacked my frog on 2 consecutive casts. I followed back with the worm but could never conviced her into biting again... We continued fishing the bay for the rest of the tournament and Caro managed 2 other fish over 2lbs that didn't helped our cause..
We ended up with a mediocre 5lbs bag but still had a blast and I was glad to have a few new waypoints on my GPS.
Posted by Jon Belanger at 8:49 PM