First time out on St-Francis

July 11th, 2011
I was back on the water today with Caro and my friend Aaron for what felt like a revenge for our awful day on the water yesterday. We had NW wind blowing at around 10kmh which picked up to about 20km/h in the afternoon.
We started fishing fairly shallow and Caro caught the first 3 fish with the biggest one around 3lbs. We looked at new and old spots but the shallow bite was not really working for us so we decided to go deep. I caught a nice 4.5lbs smallmouth in about 25ft of water on our 3rd deep water spot but we had a few good hits in the 20-30ft range. We moved quite a bit today and didn't have a huge bag at the end of the day but it was my first time out on St-Francis and it seems like the vegetation was much different from last year. I should be fishing it a few more times over the next few weeks and hopefully do better then today. Aaron caught one shallow in the afternoon on the spinnerbait and I missed 2 more on the tube. Caro caught the majority of the fish today as usual and we would've probably had a little over 16lbs which is not bad at all... but we could've done better! 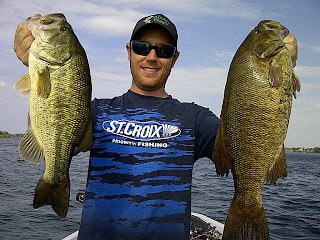 Econobass on the Ottawa River

July 9th, 2011
I was fishing the Ottawa river for the 3rd time this year and I was confident we could get a similar weight then the two previous trips but I was wrong. Again, July seems to be a tough month on this river as we were only able to bring back 2 fish to the weigh-in. Conditions didn't seem to bad in the morning with a NW wind of about 5-10km/h which made for a nice boat ride to our first spot.
The first area we stopped at had a few laydowns that were holding quality largies in practice but after trying to convince them for over 30 mins we decided to move on to another area close by where they had been hitting the frog pretty good a few days before. Unfortunatly, the frog bite was completly off and seemed to attract only pike. We missed a few bites flipping isolated patches of lily pads but it was no easy task when the wind picked up. We had to move quite a bit before I finally hooked a small largemouth that ended up being the only largie of the day.
It was about noon when we decided to give the smallies a try. After only a few minutes I got bit with what seem to be a decent size smallmouth but it came off very quickly and we didn't get to see it. We fished a very shallow rock flat and a nearby drop off when Caro hooked her first smallmouth of the day but like me, it didn't stay on for very long. Caro still managed to get a tiny smallmouth for what was going to be our last fish of day. We tried maybe 3-4 more spots but couldn't get another fish in the livewell. We even tried some new areas in hope to find a place that hadn't been hit so hard by the last 3-4 tournaments over the last few weeks and eventhough we found nice stuff and saw some fish, we weren't able to convince them to bite.
The ride back to the weigh-in was simply brutal with all the pleasure craft out on the water. I wish I could practice more often on this river but it's a bit of a drive from where I live and to be honest, I can't say I love the fishing there. Regardless, I will have to go back and figure it out once and for all!
Posted by Jon Belanger at 12:12 PM

First win of the season!

July 1st, 2011
I was fishing a charity Pro/Am event from Fishin-Canada.net today with Christian Grenier. Christian had been the observer in my boat on day 1 last year at the Berkley B1 and he was happy to be able to fish and not only "observe" today.
We started fishing a few shallow areas for smallies and couldn't get a fish to bite for the first hour or so... The 2nd area was a spot closer to the main lake and had a lot of fish on it. We drifted a few times over it and both had our limit quickly. Christian had a 4lbs + smallmouth jump out the water and spit his tube back at him..... It was there that he learned to put his rod tip down when the fish is about to jump! We then proceeded to a main lake sand flat that I was checking out for the 2nd time... we had a few fish follow and bump our baits but they wouldn't take it fully. I tried throwing plastics for awhile but seeing as I didn't really know the area I decided it was time to go hunt for a largemouth kicker!
The first area we did had decent largies swimming around us but no matter what bait we threw, they didn't care one bit. We tried all kinds of baits and techniques for about 30 mins and couldn't get a fish to bite. That's when I realized I had to try Caro's favorite bait.... To my surprise, I caught a 3lbs largemouth on my first cast and a smallie on the next one. Seeing as I had already about 9 lbs in the livewell... I gave Christian a hook and the special bait for him to start catching. He started catching fish immediatly but not the size we were hoping for. We moved around a little bit and tried tossing the frog hoping to catch a big largemouth at the end of the day but couldn't really upgrade what we already had.
My 3 fish weighed-in at 9.85lbs good for 1st place on the pro side and Christian's fish got him 4th place I think. All in all we had a very fun day on the water. I always have a blast fishing with new people and I hope they have this event again next year. 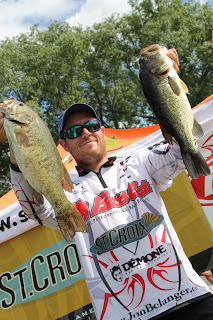 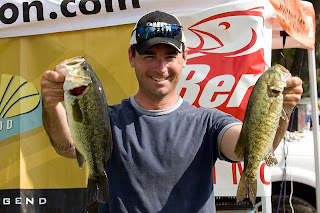