I was back on the water today with my good friend Gilles.  I really wanted to get my revenge from my bad tournament yesterday and boy did we catch 'em.  Our first stop was a nice sand flat with 2-3 ft of water and thankfully the smallies on it were on fire and BIG!  It was an area I had never fished before  so we started by throwing spinnerbaits and got a follower on the first cast of the day.  We quickly switched to tubes and senkos and had a 2.5lbs smallie in the boat almost instantly.  We moved around the flats and found a nice school of big smallmouths roaming.  Luckily, we stayed far enough and I managed to catch a 5.25lbs and a 4.75lbs.  Gilles missed a few fish while I was still in awe about the 2 giants I had just caught back to back.

We decided to drift an deeper channel close by and Gilles caught a 4.25 on the first pass..... We did a few more passes and managed to catch a few more fish between 2 and 3.5lbs.

Gilles is just starting to fish for bass and I wanted to show him a few tips on our to catch largemouths as well so we headed for a nearby bay and started casting frogs.  I was able to catch a nice one and Gilles missed 2 fish that blew up on his frog but for someone throwing it for the first time he was doing very good.

We finished our day on a more familiar spot were I caught a nice 4lbs but saw some big ones roaming... Lake St.Francis is such an amazing fishery and in my opinion a world class destination for some giant smallies.  I won the Econobass event back to back 2 years in a row on this lake and to win it a 3rd time would be unreal.  With Charles Sim, Jason Gramada and Nick Gendron fishing the trail this is year is not going to make it an easy task that for sure.


Giant brown fish from our day 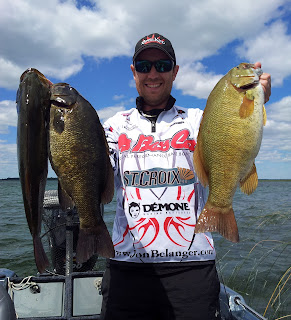 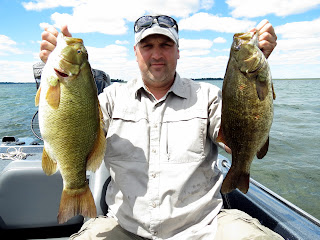