Wow!! Totally unexpected win today for the 2nd Econobass tournament of the season on Lac St.Louis out of Melocheville.  We took 1st place out of 63 teams and the 1st lunker of the tournament.

My partner Bar and I had practice a few times during our vacation and 13-15lbs was the target for the event as we were unable to find enough 4lbers to get closer to 18 ...

For once, our plan was executed to perfection.  Except for a few dropped fish that would've upped our weight a little, everything we had planned worked out really well.  We started the day for smallies and had our 13-14lbs limit by 8am.  We continued to fish for smallies and almost managed to upgrade but Bar and I both had fish that broke off before we could get them in the boat.  Around noon, we decided it was time to go look for a kicker largemouth.  The sun was out and it was a little windy but thanks to the powepole we were able to see the largies roaming in the reeds.  I was pitching a texas rigged beaver in the reeds when I saw a largie move towards my bait.  I kept my eyes on her between every flip and all of a sudden I saw her grabbed the beaver.. Thanks to my custom St.Croix Legend Xtreme I was able to lift her head in a few seconds for Bar to put the net under her.  The bigger largies were hard to find in practice and we are very happy to be able to find that one fish we were hoping for.

We weighed all the fish in the afternoon to have an idea of how much we had and we figured we had around 15lbs give or take.  Luckily, my scale seems to be a little light and I often get a surprise at the weigh in. Our bag finally tipped the scale at 16.11lbs with the biggest fish of the day, a nice 4.45lbs largemouth.

This is now my 3rd Econobass win and very happy to have done it on Lac St.Louis.  Next stop is Econobass tournament #3 on the St.Lawrence river in Long Sault.  We had a tough tournament there last season and we are going to have to do better this time around. 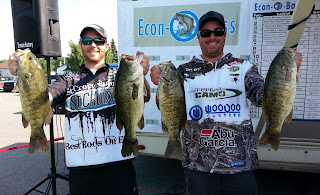